Michael Kerner found his passion in life after working as a youth counselor for 15 months in a wilderness program with about a dozen children suffering from emotional challenges.

“I knew after that experience that’s what I wanted to do,” he said. “My hope is my work serves children.”

Michael Kerner, Ph.D., is a clinical and forensic psychologist with a practice in San Jose for more than 29 years. He lectures nationally on topics of law and ethics and specializes in custody, psychological testing and performs fitness-for-duty evaluations after fatal shootings for the Salinas Police Department. He often works in collaboration with attorneys on expert witness and trial consultation.

He recently started consultation with the Morgan Hill Police Department on its peer support team in which he works with emotional issues by talking to officers as a group after a death. And, he plans to create a crisis intervention team to teach officers how to effectively deal with mentally disturbed people.

One of his lines of work includes conducting court ordered evaluations, often serving as an expert for the court and at a lot of family court hearings where he’s hired by both attorneys as an advocate for the children in custody evaluations. Or he’s employed to evaluate one parent or the other.

Born and raised in New York City, Kerner, now 61, graduated from State University of New York, at Cortland with a degree in psychology and education. After graduating, he and his girlfriend of five years went to Israel and lived in a collective community for a year. The couple broke up, married others and each had two children. Ten years ago, after both were divorced, they got back together and are now married.

After that 15 months in the wilderness with no electricity nor running water, he attended the Pacific Graduate School of Psychology in Palo Alto, now named Palo Alto University. There he got his masters and doctorate.

For seven years he worked with all 13 police departments in Santa Clara County where often he’d go to the scene of a disturbance and try to calm things down. He opened his private practice in San Jose in 1986. In 1991, he and his first wife moved to Morgan Hill from Los Altos seeking a more rural experience.

“I love Morgan Hill,” he said. “It’s changed a lot since 1991, especially with the restaurants. But it feels like I’m home.”

Kerner won the Forensic Psychologist of the Year award for 2015 from the Santa Clara County Psychological Association, an award voted on by more than 300 peers.

“I like my work,” he said. “I feel honored to work with police departments,.In my experience having worked with several, the great majority have incredible individuals.”

One thing he’s learned during the past decades is that one can never predict what’s going to unfold. That point was driven home one year when — during a break from graduate school — he took a job in West Africa as the leader of an ethnically diverse group of a dozen college students working in Sierra Leone. They arrived at the village where they were staying during monsoon season. Rain was pouring through their tent and the only semi-dry place was in front of another tent. The group crammed in to sleep. They didn’t realize they had slept on a prayer rug of the tent’s occupant. In the morning he came out and was upset. But he wasn’t upset they had slept on his rug. He was upset they hadn’t come in and availed themselves of his hospitality.

“Oftentimes I’m surprised by the outcome,” said Kerner of the man’s reaction. “What you think you might experience is far from the reality you might find. He had nothing and was sharing everything. It was very powerful.”Kerner said he loves his job. “There’s an almost sacred responsibility to treat children the best way you can,” he said. “It’s a challenge, but I feel like I’m doing something important.” 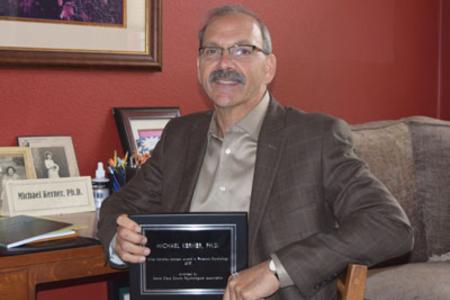 Published in the May 27-June 9, 2015 issue of Morgan Hill Life
By Robert Airoldi